There's a good summary of the concept in this NYT column by Ben Zimmer. When language is compressed in newspaper or web headlines, ambiguity results, sometimes with bizarre or comic effect. Confused readers step back and reset. There's a long and delectable tradition of such occurrences: ask your favorite search engine, e.g., about "British Left Waffles on Falkland Islands".  I experienced this the other day, observing a BBC headline of "Web attacks plague rights sites", with surprise that there might be a significant number of web sites devoted to plague sufferers' rights and that they'd become likely attack targets by the Web as a whole.  The full story made the context clearer.
Posted by jl at 5:16 AM No comments:

I just discovered Google Labs' Books Ngram Viewer.  It presents a fascinating view into the words and phrases occurring in a corpus of scanned books, showing how their usage frequencies have evolved over time and displaying the results graphically.  Try, for example, this query comparing references to different communications media.  I thought it was illuminating to include both "telephone" and "phone" there; while both terms persist and describe the same thing, use of the shorter one accelerated sharply as of the 1960s.
Posted by jl at 6:25 AM No comments:

As noted previously here, I'm interested by questions of how best to categorize things.  I'm also intrigued to see how others arrange categories based on what they need to organize.  In this light, I recently returned from a large bookstore and was fascinated to see that there were two shelves designated for "Teen Paranormal Romance".  I wouldn't have thought that this was a sufficiently frequent occurrence to warrant such a volume of material, but there you go.  Similarly, I'd found it pleasantly surprising to visit a store devoted to party goods and to see that they were well stocked with decorative items denoted for 100th birthday parties.  Maybe there are more celebratory centenarians than I'd realized?
Posted by jl at 12:44 PM No comments:

For anyone who may be unfamiliar, metadata are data that describe other data. A digital camera picture presents a good example: the data represents the image itself, and metadata include other information like when the picture was taken and with what exposure. I've recently been putting a number of slides through a digitizer, which has reminded me that only limited and coarse metadata came along when film was developed. There was usually a stamp indicating the month when the film was processed, which clearly demonstrates that a picture wasn't taken later but doesn't say anything about how much time elapsed between the exposure and its development. There was also a sequence number designating a picture's position in a roll, but it may not always be obvious which roll it belonged to if several rolls were processed at the same time. (If my samples are indicative, different processing labs provided stamped annotations that differed in detail.) It shouldn't usually take much guesswork or puzzle solving to assemble a sequence, but having to do so contrasts with what newer technology provides automatically. As for exact time data, it's not normally available, except if there's an associated handwritten note, a clock in view, or (interesting special case) the image depicts a specifically noted event like an eclipse.
Posted by jl at 2:54 PM No comments:

Cables? Why not saddlebags?

In reading the ongoing WikiLeaks press coverage, my magnety detector from this earlier post sounded again. Isn't it curious that a set of contemporary electronic messages are described as "cables", which seem like lost artifacts that a Western Union delivery person might once have carried? Why not saddlebags, like the message containers the Pony Express would have used, or perhaps ancient receptacles for cuneiform tablets, assuming there's a name for such items? Excuse me; I must now also dial my telephone, though I haven't moved a finger in a circular fashion to do so for some time.
Posted by jl at 7:19 PM No comments:

To turn a phrase, I suppose I could say that I detect irony like a magnety. If there's something ironic to be seen or heard, I'm likely to notice. My detector went off when I visited Walden Pond and saw this statue of Henry David Thoreau, with chain looped around leg and adjacent tree.  I'm not sure if this is an anti-theft measure, but the image's symbolism seemed distinctly odd. 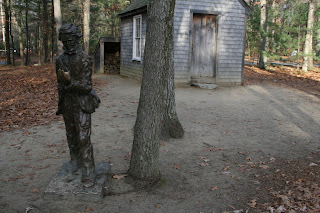