See coverage, e.g., @ Bloomberg. Reflective glass, tapered focus, solar angle. What could possibly go wrong, and what situation might architects not have considered in their design?
Posted by jl at 3:21 PM No comments:

When I attended my Hampshire College reunion earlier this month, the weekend's weather started out with several inches of rain.  It cleared on Saturday morning; when I stepped out from lunch then and happened to look up in the south-facing sky, I saw these wisps of colorful prismatic clouds suspended over the Holyoke Range of mountains and rushed to find a clear view before they dissipated.  I was pleased to collect the images.  I don't recall having seen this rather uncommon atmospheric phenomenon before, and it was a nice treat for at least this attendee. 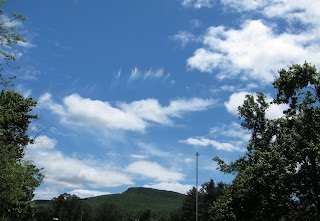 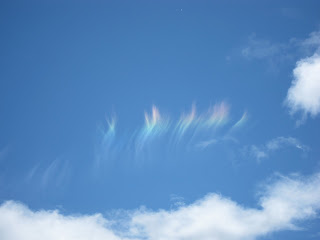 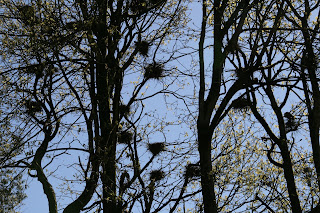 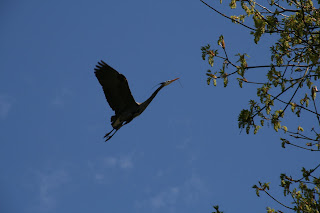 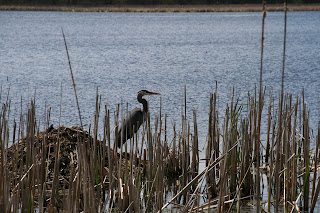 I'm hardly an expert birder, but enjoy being able to observe, photograph and sometimes identify the birds I see.  The "identify" part often becomes more challenging if I'm away from my usual New England surroundings, since many birds' habitats don't overlap different regions, but some are pleasantly familiar.  The pictures above show the Great Blue Heron rookery in Stanley Park, Vancouver, British Columbia, one of its residents carrying a straw to one of its nests, and another member of the species a few weeks later at Great Meadows National Wildlife Refuge in Concord, Massachusetts. They're majestic creatures, and I was glad to be able to collect their portraits on both sides of the continent. 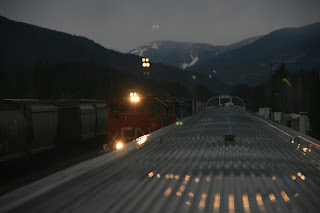 It's the little things that (stop the) count

I drive a rather old car, which continues to serve well after nine years.  When I take it for routine maintenance, there's some of the same kind of anticipation that medical tests bring. Will mechanical inspection suggest a need for some significant intervention?  Happily, that wasn't the case today. There wasn't any reported indication that the car's complex systems of moving parts weren't prepared to continue ticking smoothly as they had for over 100,000 miles.  When I sat down in the car to drive off, however, I found that the seat had slid back to accommodate longer legs than mine and wouldn't slide back forward.  Back into the service bay briefly, where a piece of rubber was extracted from the seat mounting, and off into the day.  It seemed ironic that the vehicle's internal mechanisms kept running smoothly, only to have something far simpler render them briefly unusable for my own purposes.
Posted by jl at 5:28 PM No comments: I'm clearly not the only person who spends a lot of time looking at computer screens and takes the trouble to personalize them with some sort of image from outside the computer domain.  I usually find myself selecting some natural scene, like this one that's current as of today. Based on an unsystematic over-shoulder survey at offices and conferences, it seems that family members are also popular.  Though a small gesture, the result seems more comforting than one might expect, perhaps as a reminder of being anchored into the physical world.  Even when most of the image is obscured by an email client.
Posted by jl at 1:27 PM No comments:

On computers and cameras as containers

In a traditional cold-season home activity, I've spent a while recently setting up a "new" server system on my home network. I'm quoting "new" because it's a repurposed desktop PC that's about a decade old, retrofitted with Linux and more disk capacity than its designers probably ever envisioned as being connected to its SATA ports.  It's working well for now, though. It's entirely possible that its aging power supply may die or that its motherboard may fail. Power supplies aren't hard to replace, but finding appropriately sized and cabled motherboards might be harder.  The important thing, though, is my data; if the surrounding hardware fails, I can remove the new disks, read them elsewhere, or build them into a new system.  The computer isn't a destination in itself; rather, its purpose in my IT life is to act as a means to get data on and off of disks.  The "peripheral" disk device is the central component, and the "central" CPU is present and running in order to support it.  Similarly, the purpose of a digital camera is to translate views into bits that can be stored on a memory card and processed, and that become independent of the camera that collected them. A closed camera whose images couldn't be exported or viewed except through its own screen wouldn't be nearly as interesting or useful. The cheap and ever-more-capacious storage modules can be read and written elsewhere; their information is what matters, not the surrounding systems that load the information into them.
Posted by jl at 11:22 AM No comments:

The season hasn't been especially cold so far except for one night's visit to the negative Fahrenheit numbers, but I thought that this ice pattern in a stream looked rather jaw-like, and that the sun's backlight made it somewhat jack-o'lantern-ish. 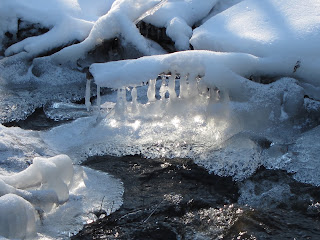