I went on a Mass Audubon trip to far Downeast Maine last weekend - out where the population thins and the cell phones roam to Canadian carriers in New Brunswick - and got to visit the unique and amazing Machias Seal Island which is officially disputed territory between the US and Canada but which Canada administers as a migratory bird sanctuary. (No passport required to visit, interestingly.) Fortunately, the day's weather was perfect; many would-be visitors are disappointed to
find, after booking their spots well in advance, that the conditions aren't suitable for getting out towards the island or to get ashore. I took many close-view pictures of the trademark Atlantic Puffins (who seem affectionate in this view), 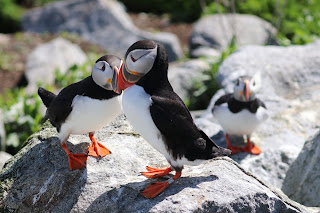 as well as other species like Razorbills, Arctic Terns, and Common Murres (as depicted below: I think the Murre looks like an orchestral conductor for the Razorbills below, though I'm clearly anthropomorphizing that...) 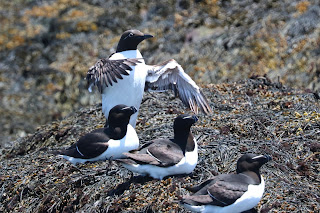 My birds in the cloud

As I mentioned a few posts ago, I recently embraced my inner geek by building a small site with Python and Django, in a DigitalOcean droplet. The result may be a bit extreme ('ya think?) for its purpose of organizing and displaying a personal collection of bird photographs, but I've been enjoying it as it's been running for a few weeks. I like being able to use the uploader to add new pictures and species into the database and display, and the ability to specify search terms and ordering. Django makes such facilities easy to implement (along with the ever-popular automated species count!) but I'm still working with the challenge of layering multiple search criteria (e.g., month and name) in a way that presents an intuitive UI. I've written up some tech-oriented notes about the site's technology and development for anyone who may be curious, but the photos themselves may have more general interest.
Posted by jl at 5:59 AM No comments: