Did I photograph the bird? Did I see it?

I was out on a (masked, size-limited, socially-distanced) birding trip yesterday, and the group was looking at gulls and other birds by the shore. There was discussion that a relative regional rarity, a Black-headed Gull, had recently been sighted there but no one spotted it before we left the site. Among other pictures, I took this shot with the Great Blue Heron in the foreground and Bonaparte's Gulls in the background. 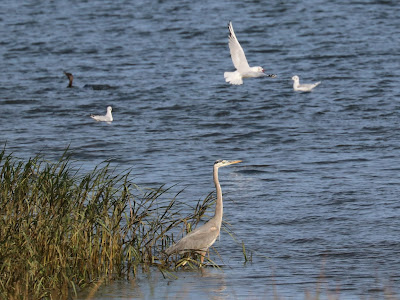 Later in the day, I got home and uploaded the collected images from my camera. Hm. What was that unfamiliar bird that's flying in towards the top of the frame, with that unusual red beak? Let's look closer. 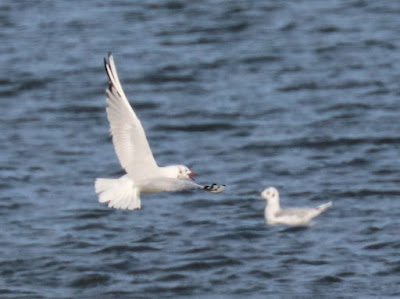 Field guides and online references suggested that this unexpected frame-crasher was in fact the Black-headed Gull that hadn't been seen in "real time" on the trip. (And, yes, its head wasn't Black as viewed, though it could have been if viewed in the different season and plumage for which it was named. Bird names are like that...) The group leaders, with far more years of birding expertise than I, agreed that it was.

This raises an intriguing question of just what it means to see or photograph something. The Gull in question was clearly in the frame of the camera that I was holding and aiming when I pressed the shutter. I'll conclude that I did "photograph" it, at least in the sense of collecting its image. I don't recall being consciously aware of its presence, though. The first time I distinctly "saw" it was later in the day, when I viewed the digitized bits on a screen. I do appreciate its surprise visit, though!

Photo-geeky PS: as I think about the image more, I'm increasingly amazed by it. This was taken with a long lens with aperture almost wide-open, for about 900mm full-frame equivalent focal length. The larger version as shown was itself cropped to about half the width of the entire image as photographed. All these factors mean a lot of magnification, with not much depth of field. The autofocus locked on the heron in the foreground. Still, the Black-headed Gull is in sharper focus than the Bonaparte's Gulls in the background. So, not only did it decide to fly in at the right time to appear above the heron in my image, but did so at the relatively narrow distance range that would cause it to appear other than as a blur. How improbable?

I'm now taking and enjoying a MOOC that combines lectures and coding projects. I find these to be engaging learning experiences, providing good mental exercise. There's nothing like the sensation of "gee, I've now made this work". That said, I've watched myself do this many times, and observe some patterns. When approaching what appears to be a complex problem, I'll first tend to procrastinate, waiting for just "the right" combination of alert and undistracted time for concentration. Sometimes, I'll get to the point of first digesting the problem statement and contemplating its possible solution, and will then initiate another procrastination cycle. Eventually, I'll get into coding the project, and will become engrossed in populating the needed modules. I'll get to the point of a test run, and will try to deconstruct errors via inspection and by inserting debugging print statements. Sometimes, discussion forums will offer useful insight or pointers. I'll itch to complete the process. Finally, I'll (at least usually) get a set of working pieces together and obtain the desired result. It feels like a satisfying milestone, even as I'm aware that the MOOC authors have crafted the materials with the expectation that their students should be able to reach this point. I'll reflect on renewed appreciation of the fact that such resources are available. Thanks, 2020 Internet!
Posted by jl at 12:52 PM No comments: