Over three orders of magnitude!

I don't think it's common for the price of a given good to vary by more than three orders of magnitude depending on its location and circumstances, but that seems to be the remarkable situation with cellular data, so I'll remark on it. In the US, I'm using a plan which seems to be fairly typical, and that offers 2GB of data per month for $25.  That's $0.0125 (1.25 cents) per megabyte, and is an allowance that I've never used as much as half of; if I track usage, it's more a matter of curiosity than of financial concern.

My US carrier, not atypically, posts pay-per-use rates for international roaming that range up to $19.97/MB, which is almost 1600 times higher than my domestic cost.  It's practical to communicate in this price bracket with occasional access to text-only email (which may have been the primary use of mobile data when the rate was set, but I don't know the tariff history), but is much harder to manage economically in an era of rich graphics and autonomous mobile apps "phoning home" to their servers.  There have been numerous horror stories from unwary travelers who have returned from overseas trips with smartphones to find that their data services worked smoothly but the the resulting charges dwarfed their air fares.

It's now possible to get international packages with terms that have improved significantly over recent years, allowing cheaper roaming to many countries (e.g., 120 MB for $30, or $0.25/MB, 20 times my domestic plan rate and about 80 times cheaper than the pay-per-use rate), but these don't operate everywhere.  (Tip: if visiting an excluded country, find Wi-Fi, use SMS, or make the most of a rare opportunity to disconnect.) If one of these plans is active, it moves the criteria for mobile data usage from something like "only in case of emergency" or "only if price is no object" to "apply thoughtfully and carefully, where and when useful", but not as far as the domestic "use freely and don't worry much about measurement" category.  I'm able and willing to measure usage and act accordingly, so this works for me, but it can seem awkward and unfamiliar if you're accustomed to data usage being effectively free within an existing plan.

On travel, packing, and writing

Looking back over posts here, I see that a lot concern travel in some form, which makes me think to inaugurate a tag on this theme.  I'm a fairly occasional traveler, and each trip has its own drumbeat of anticipatory preparation, generally culminating in early arrival at a departure terminal, waiting there to leave.  On the preparation side, it seems that the notable voyagers of years past assembled rolling libraries of attire, their capacious trunks sufficient for any formal occasion.  On my side today, clothing choices are usually simple, casual footnotes relative to the technology items (and, be sure not to forget, their chargers) that share the cubic inches available in carry-on bags.  Oh, and maybe a snack or two, since it's usually unclear whether or when food might be available.  It's always a compromise to compress one's personal environment into portable form, and departure or absence from the familiar promotes introspection. You bring yourself on any trip you take, after all, and your mind stays powered without plug adaptors.  I don't think the volume of travel essays is coincidental.
Posted by jl at 6:41 AM No comments:

Online used books: do they make it up in volume?

I recently wanted to get a copy of a book from the UK, and found several online sellers offering it for prices of 1 cent upward, plus shipping. That seemed too low to believe, so I stepped up to another offer of 99 cents and $3.99 shipping/handling. It arrived a week or two later, and I imagine air post might have taken up at least much of the $3.99 by itself. It might even leave a negative amount left over for the handling and envelope required. Presumably, there'd been work needed beforehand to catalog the inventory, as well. This for a book with a price tag still affixed for several pounds. And, as noted, there were several low price sellers also offering, some for even less. I'm wondering how the business model works, or what I may be missing here. I won't argue with success, though.
Posted by jl at 9:40 AM No comments:

Safety alert! This plug was ours. Could it be yours too? 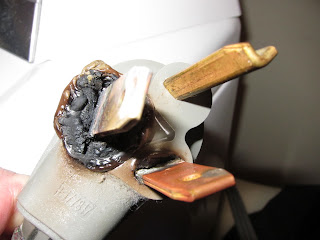 We turned toward each other, to ask the same question: "Do you smell something burning?"  Nasally-led investigation led soon to the clothes dryer, whose operating cycle seemed to be largely complete, but whose electric outlet displayed a trace of smoke.  Once the circuit was switched off, the plug's unpleasant countenance was revealed.  Apparently, arcing from loose or corroded plugs and sockets is a major cause for electrically-related fires. We're very glad that we caught this one while it was contained, but are still working to dispatch the remaining odor.
Posted by jl at 9:26 AM No comments: