Ubuntu's 22.04.1 LTS release came out fairly recently, and I had it on my to-do list to get around to updating some components of my personal digital empire once it did. I'd already been using 22.04 on my desktop for several months, to general satisfaction and particular appreciation of its having included a new enough version of Darktable to handle the CR3 raw format that one of my cameras produces.

So, to the updating. I have a DigitalOcean droplet that runs the Nextcloud snap. I like having a small bit of cloud that I can manage myself, primarily to share files among devices and sometimes with others. I use memory cards with higher storage capacity than the minimal droplet's 25GB, but it serves its purpose. sudo do-release-upgrade worked fine. One system checked off.

I also have a home server, which also hosts a Nextcloud alongside other services, for larger-capacity sharing within my LAN. Here, the Nextcloud instance hadn't auto-updated like the droplet's snap, and I (bad me!) hadn't been attentive to updating its versions while the service continued to "just work". After the OS upgrade, I found that the Nextcloud-in-place required a PHP version earlier than the 8.1 included with Ubuntu 22.04, so couldn't generate display pages. There's a third-party repository that has older PHP releases, but I wasn't quickly able to line up the right set of configuration for the old Nextcloud to make use of it, and it was Update Day anyway! After three successive updates to Nextcloud to successive versions, I got it current and able to find and use PHP 8.1. My screen sync icon winked with approval.

Lesson: be aware of dependencies, and do upgrades when you have time to deal with surprises.

With dedication and industry, one can dig oneself a hole 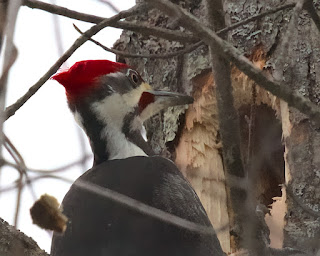 Let the chip(s) fall where they may!