And, the most important item is...

It was unusually cold a few days ago, and a local media source was advising the public about how they should prepare before going out in their cars.  They referred to traditional items like ice scrapers and windshield washer fluid, but I was interested to note their stress on one particular piece of equipment as more important than others: a charged cell phone. This makes a lot of sense, so as to be able to summon emergency assistance. On the other hand, it doesn't say much if your goal is self-sufficiency in an emergency.  I don't think most cell phones would work effectively to clear windshields, though they could be useful to obtain weather forecasts.
Posted by jl at 7:42 PM No comments:

Two years of completed books, 2009-2010. I've been keeping these logs
for some time now, and have often found it interesting to review them to
see what I've read and to recall some of my motivations and reactions.  It's another view on a personal empire of interests, a mix of highbrow, lowbrow, sidebrow, and nobrow, and maybe a challenge case for a "you liked this, so you might also like that" algorithm. I count 48 books over 24 months, but my average consumption rate has a high standard deviation and is probably trending downwards given competition from other media and activities.  Still, finishing a book represents a form of completed commitment and offers a metric to observe.  If any readers here would like to comment about books cited here or to provide "if this, try that" suggestions, please do.

Decline and Fall of the British Empire, Brendon.
The Wrecking Crew, Frank.
Thames, The Biography, Ackroyd. (More mystical in parts than I'd prefer.)
The Forgotten Man, Shlaes.
House of Cards, Cohan. (Bear Stearns crash and history. Good, but
sometimes technically obscure.)
The Man Who Smiles, Mankell. (Good mystery.)
The Media Relations Dept. of Hizbollah Wishes You A Happy Birthday,
MacFarquhar. Engaging and insightful, and one of the more fascinating
titles that I can recall.
Before The Frost, Mankell.
Origins of the Specious, O'Conner.
The Toothpick, Petroski.
The Dogs of Riga, Mankell.
Julie and Julia, Powell.
The Aggressive Conservative Investor, Whitman & Shubik. Some interest,
but also appeared somewhat dated. Deprecates total return investment.
Return of the Dancing Master, Mankell. Very good.
Spoken Here, Abley. Well-done travels among endangered languages.
Manias, Panics, and Crashes, Kindleberger. Classic and authoritative.
The Man who Loved China, Winchester.
The First Tycoon (Vanderbilt), Stiles.
The Devil's Picnic, Grescoe.
The Pleasures and Sorrows of Work, de Botton. Thoughtful and witty.
The Lost Art of Walking, Nicholson.
Rogues' Gallery (Metropolitan Museum, NYC), Gross. The discussion of later years seemed more focused on society gossip than on the museum itself.
A Splintered History of Wood, Carlsen.
Do Travel Writers Go to Hell?, Kohnstamm.
The Ground Truth (9/11), Farmer.
An Arctic Voyage, Carter.
The Last of His Kind (Bradford Washburn), Roberts.
Traitor to His Class (FDR), Brands. VG.
The Match King (Kreuger), Partnoy.
The Technical Culture of Ham Radio, Haring. A sociological remainder.
Italian Shoes, Mankell. Sometimes odd, but moving novel.
Inventing Niagara, Strand. Intriguing.
Birds of Concord, Griscom, Fascinating changes over decades. I picked up a
well-annotated copy in a used bookstore some time ago, and this is one
of the few cases where I've appreciated comments added to a book other
than by the author.
Ghost Train to the Eastern Star, Theroux. Worth savoring.
Panic!, Lewis. Good collection.
Too Big to Fail, Sorkin. Long, informative, and engrossing.
Brush Cat, McEnany.
To Hellholes and Back, Thompson.
The Big Short, Lewis. Riveting and insightful.
The Last Fish Tale, Kurlansky.
Red House, Messer. Engrossing.
Grounded, Stevenson, Fun, short.
Idiot America, Pierce. Good.
Brilliant, Brox. (very good, history of light)
To Rule The Waves, Herman.
Dark Genius of Wall Street (Jay Gould), Renehan.
Enemies of The People, Marton.
At Home, Bryson. (Engaging. More quotable points than maybe I've seen assembled in any one book.)
Posted by jl at 1:21 PM No comments:

Thanks, great bird, for standing still!

On New Years' Eve, I was walking along a snowy trail, having seen few other creatures larger than chickadees, when I was startled to see this heron perched on a bridge.  It didn't seem fazed at all by my approach, and I'm sure that I found it more interesting for the next several minutes than it found me. (To me, it was a rare chance for a close-up portrait; to it, I must not have appeared relevant in either the food or threat category.) When a couple of other humans arrived nearby, this may have been too much, too close, and then it flew. 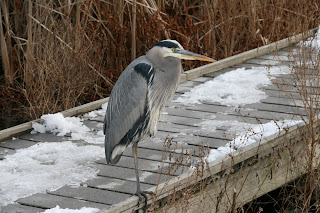 Streak planning for the well-annotated calendar

This JPL link has a convenient writeup about meteor showers through 2011.
Posted by jl at 7:28 AM No comments: