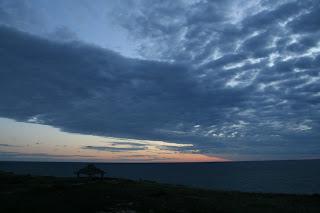 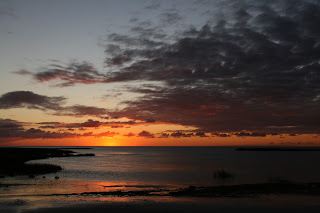 I spent a couple of days on Cape Cod, which reminded me that there aren't so many places well suited to seeing both sunrises and sunsets. An unobstructed ocean view to the horizon is ideal, but geography doesn't usually provide those conveniently in both directions from one place.  The US East Coast was suited for early-to-rise lookouts, awaiting ships crossing the feared North Atlantic from Europe. Today, Long Islanders commute to New York opposite the sun's glare on Sunrise Highway. The Pacific, true to its name, provides a base for beach volleyball later in its day, and for Sunset Magazine.  Both sides have their early and late dog walkers and photographers, but whether the sun's showcase occurs at the beginning or end of the day may influence local culture more than we sometimes realize.
Posted by jl at 7:37 AM