Now that photographic technology (at least its non-glass parts) has evolved into the digital age, it advances much more quickly than it did in the analog era.  Sometimes, it becomes easy to find what would have been unimaginable a few years earlier.  I tend to be something of a cheapskating late adopter, and find that previous models often provide powerful capabilities to use and grow into, at impressively low cost. In this vein, I recently jumped on the chance to purchase a Canon SX50HS (introduced in 2012), my first venture into the superzoom category. Its then-astounding 50:1 zoom range tops out at 215mm, offering equivalent magnification to what would be a 1200mm lens on a 35mm camera. I was able to pay less than $200 USD for the entire camera rather than the $180K currently quoted for a rare and massive 1200mm lens. Naturally, the image quality isn't the same, but I think it's quite usable by my standards.  Also, it's small and light enough to be reasonably wearable (and, hence, conveniently available) rather than haulable.  I took it out for its first bird walk yesterday and was pleased to be able to collect this shot of a tree swallow peering out from its nest hole. 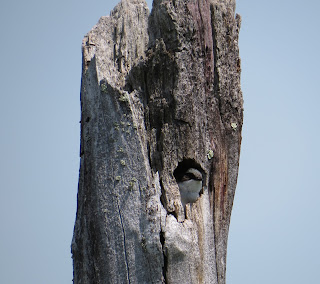 Capable viewing, looking out from a small enclosure. I can appreciate that.
Posted by jl at 11:17 AM