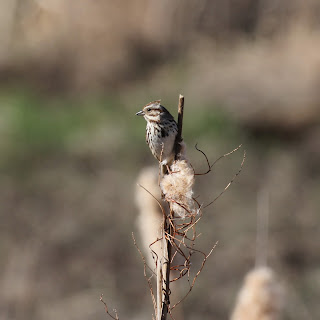 So, I took this picture of a common Song Sparrow the other day. When I uploaded and viewed it, I was... surprised. They're not supposed to have crests on the tops of their heads; a rare crested form would be newsworthy. What happened to cause that peak with the sharp vertical boundary? I first wondered whether there was a bug in jpeg encoding, but the raw image looked the same. The best interpretations I've received so far conclude that there was a wind blowing from the right (which is quite possible) and that it's pushing feathers upwards towards the middle of the head. Seems plausible (and also consistent with the fact that the back of the head seems to have been uncovered as if in an anatomy lesson), but I find it striking that the feather edge would line up as straight as it does. Always new things to see!