People used to pay like that to talk? Really? 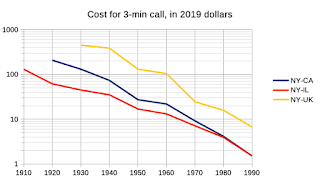 The idea of time- and distance- based charges for communications is fast fading into memory, and newer generations may find it as curious or odd as rotary dials. I was recently asked whether it would have been feasible for family members to talk to each other across the Atlantic in the 1950s rather than writing letters, which led me to undertake the little history project graphed above. For many decades, telephone service was available in principle but staggeringly expensive in practice, a precious resource usually reserved for rare, rushed occasions or critical business negotiations. As an illuminating report observes, "In 1930, the cost per minute for a 200 mile call was about 10 times the cost of sending a first class letter." Also in 1930, a 3-minute call between the US and the UK (which would have been routed by radio, as the first telephone cable across the ocean didn't come into service until 1956) would have cost about $450 if expressed in 2019 dollars. Technological advances (and, later, increased competition) pushed the numbers down the logarithmic scale through the years. And, yes, the downward trend continued beyond 1990, eventually approaching zero with Internet telephony, but competitive and complex discount plans make it harder to extract accurate and representative data for later dates. The overall conclusion's clear, though; it's become a lot cheaper to communicate electronically.

A note on sources and data: while I won't attempt to enumerate a full set of bibliographic citations for a blog post, I was impressed to find the Internet Archive's downloadable collection of telephone directories dating back to the early 1900s; thanks, Brooklyn Public Library, for scanning them. Also, thanks to Andrew Odlyzko for his excellent papers and articles on communications history. And, to the US FCC for their 1997 reports discussing communications costs and their evolution over time. And, to the Internet itself, for bringing such sources to my laptop quickly and without need for paper correspondence or physical travel to remote libraries. The numbers as graphed reflect peak-hour ("standard") rates as I found them, with some adjustments like using nearby years based on availability and scaling where lengths of rated calls were different. I applied inflation adjustments using the BLS CPI calculator.
Posted by jl at 6:31 PM